Stuart, FL – June 20, 2019 This year the National Federation of State High School Associations (NFHS) will be celebrating its 100th year of existence. Team IP has had a long-standing relationship with the federation and is excited to join with them in the celebration, which will culminate with the 100th Annual Meeting of the organization June 28-July 2, 2019 in its hometown of Indianapolis.

The NFHS was born on May 14, 1920, when representatives from state high school associations in five states (Illinois, Indiana, Iowa, Michigan, and Wisconsin) met in Chicago to discuss eligibility concerns. Four of the five states (minus Indiana) returned to the 1921 meeting to formally adopt the constitution and became charter members.

Throughout its 100-year history, the NFHS has been instrumental in writing playing rules for high school sports. Currently, the organization writes playing rules in 17 sports for boys and girls and publishes about 30 rules publications annually, including rules books, case books, officials’ manuals, and handbooks.

Several special events are being planned for the 100th Annual Meeting in Indianapolis, which will be held at the JW Marriott and the Indiana Convention Center. The five-day festivities will kick off June 28 with the Welcome Dinner/Open House at the NFHS office in White River State Park.

“We are excited to be able to showcase the great work of this organization over the past 100 years,” said Dr. Karissa Niehoff, NFHS executive director. “Many of our member state associations have recently celebrated their Centennials, and those associations have been a big part of our history in providing athletic and activity programs for high school students.”

Team IP is proud to partner with 10 members of the federation which include FHSAA (Florida), GHSA (Georgia), AHSAA (Alabama), SCHSL (South Carolina), IHSAA (Indiana), KHSAA (Kentucky), UIL (Texas), RIIL (Rhode Island), MIAA (Massachusetts), and DCSAA (District of Columbia). Through this partnership Team IP manages the production and distribution of all decorated championship apparel and branded merchandise for school sporting and academic events, from the district level to the state championships. Team IP also serves as an NFHS National Corporate Sponsor for Baseball and Softball.

“The Federation has played a key role in the Team IP story for many years. It’s an honor to help them celebrate such a momentous occasion. We look forward to growing our partnership with the NFHS and are excited to see what will unfold in the next 100 years.” 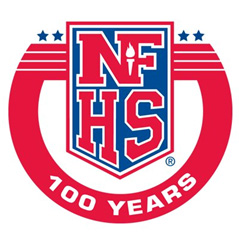